LIVE
HQ
| Honey, I Joined a Cult
See in
HQ

"That was some of the technology we started off with right at the beginning, aside from 'okay, how do we fix the legacy issues of latency controls and responsiveness and basically how do we make Abe more dynamic, faster-moving - you know, more responsive all the time'. Inside of that we were like look, [Soulstorm] Brew is at the heart of this game, the Brew is something flammable, there's a deep mystery around it, and it's part of the great mystery around this overall story arc.

"And with it, it's flammable, and it was always supposed to be flammable, but flammability is something in games... like we burn a lot of things but not like real fire, and so we wanted to focus on that liquid flammability for trap-making and things like very volatile substances that can blow up in your face, you know like dynamite or nitroglycerin. So in that, that was one of the earliest things that we started R&Ding on [research and development], was can we do the impression of spreading gasoline, spreading a flammable substance all over the place, and just igniting it and it doing the proper thing that you would expect, and then burning that into an industrial inferno.

And then when we got that working right we were like 'oh god we really need to burn things down now', so how far can we take this, this living force of fire? And that led to destructible, burnable operations, like entire mines - there can be big mineshafts of wood - could be ignited and burned and turned into huge industrial weapons [...] The fire led to the physics, and the physics led to various variations of that, where we wanted a playing field that would change shape over time.

[...]It's not a revolutionary game - it's an evolutionary game upon the platformer genre, turning it more into a 2.9D, more fully immersible and emergent simulation of the world where you're provoking trouble and the world starts changing around you. And we got all that running, but as I say it's an evolution upon the genre about a revolutionary experience, so we're doing evolutionary technology in the genre about revolution, because really that's where this series is headed, right? Abe starts at the bottom in the worst place you'd ever wanna be, and just through desperation of trying to stay alive and trying to help others that are in a similar circumstance, winds up starting to affect economies, shutting down factories, and eventually leads to uprisings that leads to movements that will lead to revolutions that will eventually change the world."

Thank you for your time. We will take care of this matter as soon as posible
Evolusjonere? Mener du evolvere? (Det heter evolve på engelsk, ikke evolutionize) 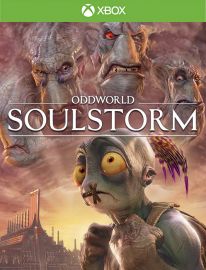