"For me I believe, I mean I followed a little bit of the idea of like Miyazaki and how Miyazaki handles film, where I feel like a respect to the audience, so you're not talking down to kids," forklarte han. "I think that kids, they appreciate the same things we do. They might not have the ability to articulate it as well, but they can appreciate everything that adults do as well too, so I don't feel that we made any compromises to make it kid-friendly or anything like that. I know for me as a kid too I would have loved all this stuff in it, I mean I think that was a big driving factor for us as well too. It's like 'what would I have loved as a kid?'"

"We have a couple big high-level goals that get filtered down, and from the top was we wanted these alien planets to feel special and alien, but if everything feels alien then nothing feels alien and special, so we kind of split it up in the start [to] planets that feel a bit more terrestrial and recognisable [...] that's balanced with the really alien stuff which you haven't seen, the real alien stuff that feels dramatic. So we want that, when you get to one of those planets, for players to go 'wow'." 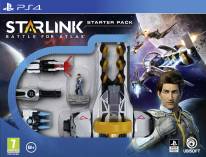